Deepika Padukone surprise her fans with her red carpet 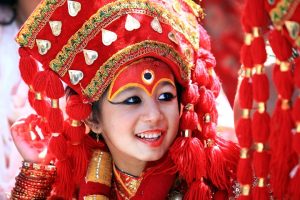 kumari is refers as the living goddess of protection divine power and courage. This is evidence of virgin worship taking place in Nepal  for more than 2,300 years. Living Goddess is worshipped with great reverence and even the Shah Kings followed the tradition of receiving tika and blessings from her. Dating back to the 17th century, the practice was institutionalized by a Malla king. There is story about the Taleju. Some believe that the goddess visited King Trailokya Malla every night in the human form. Like other legendary stories, the king and the goddess played tripasa (dice) while discussing the welfare of the country. However, one night, King Trailokya Malla made sexual advances towards the goddess Taleju. As a result, the goddess in rage stopped visiting the palace. The king in regret worshiped and pleaded for her return. from that day to recall the goddess back king start to practice worshipping living goddess. This is the history of living goddess. 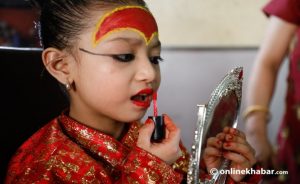 Once the Kumari is chosen, she must be purified so that she can be an unblemished vessel for Taleju. She is taken by the priests to undergo a number of secret  rituals to cleanse her body and spirit of her past experience. she has to live within the Kumari Ghar (Kumari’s House), her feet must never touch the ground and will leave her residence only during certain festivals. She will remain a Living Goddess until menstruation cycle start, which is usually when she reaches puberty.

Selection of kumari is also most of the addressing concern because she is worshipped as the living goddess of universe. Girl should have thirty two perfection of goddess. She must be in excellent health, never have shed blood or been afflicted by any diseases, be without blemish and must not have yet lost any teeth. Her hair and eyes should be very black, and she should have dainty hands and feet, small and well-recessed sexual organs and a set of twenty teeth.

Actually the life of living goddess is unique and much difficult because girl have to live without their parents from such an early age. The parents are proud of giving birth to Goddess Taleju, but also remain sad parting away with their daughter. The parents aren’t allowed to visit their daughter and only see their children when Kumari ventures in special facilities, about 13 times a year. They must guide her through her life. They are responsible for bathing her, dressing her and attending to her makeup as well as preparing her for her visitors and for ceremonial occasions.