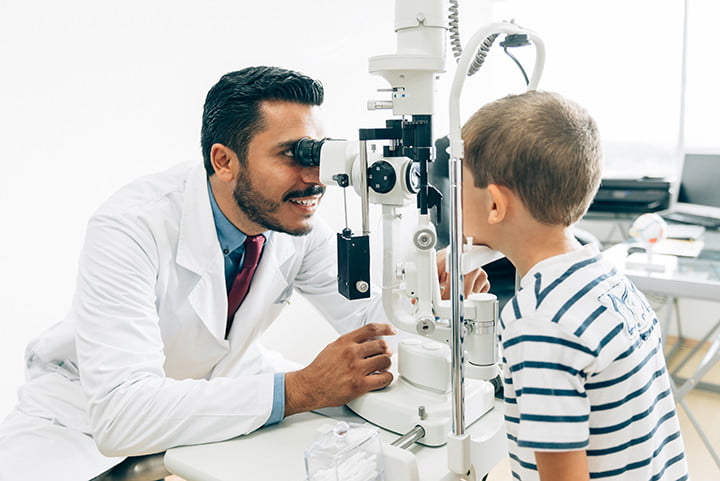 “Proper care of eye in a digital world.”

Thyroid cancer is one of the most common cancers in Nepal. It is considered one of the, relatively, better cancers to get as deaths are rare, with a 10-year survival rate post-treatment in more than 90 percent of patients. Thyroid cancer is usually detected in its early stages and in six out of 10 patients operated on, the cancer has been confined to the thyroid.

In Nepal, national data for thyroid cancer is not available but every year, a five percent increase is assumed, with approximately 1,000-1,200 new thyroid cancer patients diagnosed annually. Tertiary-care hospitals are carrying out approximately 30-50 thyroid cancer-related surgeries per year. This growing incidence can be attributed to improved and easily-available diagnostic tools, like ultrasonography which can be conducted for non-specific throat discomfort to detect suspicious thyroid lesions. Thyroid cancer is four-to-five times more common in females than males with the 25-50 year age group most at-risk.

The thyroid gland is a vital endocrine organ that helps regulate metabolism, growth and maturation by releasing hormones into the bloodstream, specifically Triidothyronine (T3), Tetraidothyronine (T4) and calcitonin. This butterfly-shaped gland, consisting of two lobes connected by a strip of tissue, is located at the base of the neck, below the voice box.

Like any other cancer, it is caused by the abnormal growth of cells. Its cause can be multifactoral, from endemic iodine deficiency, genetic mutation, radioactive substance exposure, previous radiation therapy or various other genetic disorders.

Papillary and follicular carcinoma are also known as differentiated thyroid cancer as they grow from normal thyroid cells and are often considered as ‘good’ prognostic cancer. Papillary carcinoma, which is the most common form of thyroid cancer, grows very slowly, typically in one lobe of the thyroid gland. It often spreads to the neck’s lymph nodes over time. Despite this spreading, it is usually easily treated and rarely fatal. Follicular carcinoma also spreads to other parts of the body, such as the lungs and bones, rather than the lymph nodes. The outlook for this cancer is slightly poorer, but it is still considered better than other forms.

Medullary carcinoma can develop in the thyroid and spread to the lymph nodes as well as other parts of the body. It is notorious for recurrence and carries a poorer outcome than differentiated thyroid cancers. Anaplastic carcinoma, though rare —making up only two percent of thyroid cancers—is considered the worst type of thyroid cancer with survival after diagnosis counted in months. It often develops in long-standing goitres which are often seen in remote areas with iodine deficiencies.

Thyroid cancer is most commonly present as a lump or swelling in the neck. This lump is often asymptomatic and can be detected during a routine checkup. It may also be found in an ultrasound or CT scan, which may have been conducted for different health issues or nonspecific throat pain unrelated to thyroid cancer. Other symptoms, like difficulty swallowing, voice changes, pain, lumps in the side of the neck, only become noticeable when the tumour grows larger.

During the process of detecting thyroid cancer, the doctor performs a physical examination of the neck, paying special attention to the feel and size of your thyroid and lymph nodes. If thyroid cancer is suspected, a specialist conducts a test. First, an ultrasonography is done where the risk stratification of swelling in the thyroid nodule  is evaluated. If suspicious, a fine needle aspiration cytology (FNAC) is done, where a specialist inserts a needle through skin and into the thyroid several times to take tissue samples from different areas of the gland.

Sometimes, the FNAC might not be clear and if the ultrasonography is suspicious then a surgical biopsy is performed, which is done by removing the affected lobe. Apart from these tests, a routine thyroid function test (T3, T4, TSH) from the blood is conducted, which is normal in most thyroid cancer patients. Other blood tests might be necessary in special conditions.

Affected lymph nodes might also need to be removed. Thyroid cancer surgery may cause side effects like temporary or permanent voice changes due to injury to the nerves that lie in the vicinity of the thyroid gland, especially in advanced cases.

Sign and symptoms related to calcium deficiency, like muscle spasms and facial twitching, which happens due to temporary or permanent damage to the parathyroid glands which are in close relation with thyroid glands.

Most patients are afraid of surgery due to these side-effects but these kinds of surgeries are safe when performed by high-volume thyroid surgeons. Hospital stays post-surgery are short, so is recovery time.

Most commonly, this surgery is performed by a transverse incision in the neck and most scars are hidden by natural skin creases. Various new surgical techniques to prevent scars are also available, like an endoscopic surgery, which is available in Nepal.

In advanced cases of differentiated thyroid cancer, patients might need to be evaluated with a radioactive iodine scans post-surgery, which is also available in Nepal. With this scan, any microscopic remnant of cancer is evaluated and, if present, is destroyed with an ablated dose of radioiodine.

Post-treatment, patients require follow-ups with the treating physicians, where their thyroid function, tumour marker in the blood (thyroglobulin in case of differentiated thyroid cancer) and ultrasound evaluations are conducted at regular intervals.

Cancer recurrence is rare after comprehensive treatment and even if it does happen, it’s easily fixed without significant morbidity or mortality. The roles of radiotherapy and chemotherapy are very limited in thyroid cancers and are only needed in a few selected cases. Newer targeted therapies are useful in a few cases where surgery and radioiodine therapy fail, but these can be very costly.

A multidisciplinary team of doctors, consisting of a head and neck surgeon, thyroid pathologist, nuclear medicine specialist, radiologist and endocrinologist, is key to treating thyroid cancer. All manners of used in thyroid cancer management are available in Nepal and there is no need to travel to another country for treatment costing almost 10 times more than in Nepal.

Thakur is programme director of the Head and Neck Oncology Programme at the Nepal Cancer Hospital and Research Centre, Harisiddhi, Lalitpur