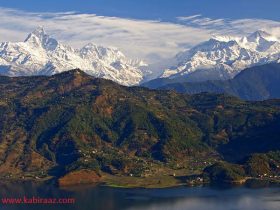 Tatopani is beautiful place you should visit it

Kathmandu. James Cameron’s much-anticipated Hollywood film ‘Avatar: The Way of Water’ is projected to open at the US box office with $150 million.

According to Deadline Hollywood magazine, even if the target is close to 175 million dollars, its minimum earnings can be fixed at 150 million dollars.

The projected earnings of Avatar 2, which has no fan-base film, is 95 percent higher than the first part released in 2009. A recent survey found that Latino, Hispanic and black audiences in the 30 to 40 age group wanted to see the film.

According to the announcement made only on Saturday, along with the US, this film will also be screened in China, another big film market, on the same date. Leaving aside many Hollywood blockbuster films, it seems that China will only allow Avatar 2 to be screened.

“Avatar 1” has earned more than 260 million dollars in 3D and Amax in China. Advance ticket sales have started in the world’s biggest film markets. Its length is also 3 hours and 12 minutes.

The length of the film does not affect the audience of the distribution company. Nobody knew anything when the first part of the first one was released where aliens were the main characters. Like Titanic, the Cameron-directed film managed to earn $2.9 billion worldwide.

The craze of ‘Avatar 2’ has started to be seen even in the neighboring country of India. Indian multiplexes have started selling tickets in advance. The first show is also scheduled at 12 midnight.

In India, the film is being released in English, Hindi, Tamil, Telugu, Kannada and Malayalam languages. In the advance ticket sale, which was opened three weeks before the release, more than 15,000 tickets have been sold in 45 multiplexes in India within three days.

Kamal Gyanchandani, CEO of PVR Multiplex, says, “James Cameron and his films have always created magic at the Indian box office and the audience has been waiting for this moment.”