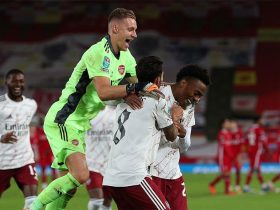 Arsenal beat Liverpool on penalties in the quarterfinals.

Actress Priyanka Chopra and her husband Nick Jonas have participated in the BAFTA Awards 2021 which started in London. Priyanka’s dress, which was seen with her husband on the red carpet of the award, is being discussed on social media. The 74th British Academy of Film and Television Awards was held on Sunday at the Royal Albert Hall in London. Wearing a red jacket on the red carpet, Priyanka looked very hot. Talking to the media on the red carpet, Priyanka also talked about her trip to London and her new film. Gaurav, the protagonist of the movie ‘The White Tiger’ starring Priyanka, was nominated for Best Actor in this award.

Actress Chopra is busy shooting for the movie ‘Citadel’ in London. This wave series is being directed by Russo Brothers.