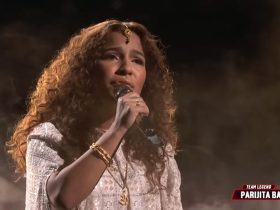 Parijita Bastola in the final 8 of The Voice.

What is the dominance of Nepali film industry? Everyone’s argument on this subject may be different. Some are saying that there is no familyism in the film industry while others have mentioned that groupism is prevalent in this sector.

Some actors have also expressed outrage that familyism is prevalent in the film industry and it does not give importance to talented actors.

Actress Priyanka Karki has also made her statement public in this regard. When asked by a fan on Instagram, Priyanka said, “Familyism is everywhere.”

A doctor wants to see his son become a doctor. The businessman wants to bring his children into the business sector. It’s not bad. ‘

But Priyanka has warned that talented people should not be overshadowed due to familyism.

Karki has expressed the view that it is bad not to give opportunity to good talents due to familyism and trying to cover them up.

Priyanka, who entered the film industry from outside her family background, is now a popular actress.