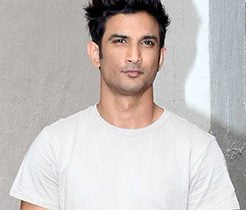 Kalinchowk is a beautiful rural municipality in the Dolakha district of Province No-3 which lies in the north-eastern part of Nepal at the elevation of about 3842m. It is a popular destination and also regarded as a perfect hiking & shortest trekking destination of Nepal.

Due to the easily accessible via road transport, it has been one of the most visited tourist places for domestic travelers every year. Kalinchowk is also famous for short hiking.Since ancient times, the temple is situated on the top of the perilous hill. Kalinchowk is named after the goddess Kali which is related to power and destruction. It is believed that in Dwapar Yuga,Pandavas came here for meditation.

According to the myth, it is believed that Goddess Kali used to meditate in the top-hill of Kalinchowk, on Sumeru Parvat. During the mediation, the evil power tried to win over Kali. After this, the war took place between goddess Kali and evils. During the war, Lord Shiva used his divine Trishul (metal weapon) and the holy water originated from the dry land which gave the power the lion of Goddess Kali. The evils could not stay-on in the powerful Goddess Kali and were killed by her during the war.

All the evils were killed and their bodies were decayed to the place of Kuri and the village was found stinky and so, from the word Kuri the place is known to be a Kuri village which means ‘shame shame’. 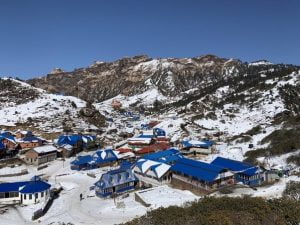 The “water-pond” in the top of Kalinchowk, it is believed to be holy and pure after showering and taking the water from the Kunda. From the religious treatises of Durga Puran, it was said that this is the place where the goddess Devi’s right arm was downfall. In this Kalinchowk Bhagwati pilgrims, they offer bells, Trishul, flowers, agarbatti (incense sticks) ghee, and bangles, and chunari. Devotees come to this temple to take the holy water.which is given by adore of this temple.People has great belief that their wishes, come true or get fulfill after worshiping the goddess Devi with pure soul.

Kalinchowk Bhagwati is one of the most popular Hindu shrines, which is situated in Charikot Head Quarter of Dolakha at the altitude of 3,842 meters from the sea level. Kalinchowk Bhagwati Temple is also a part of the Gaurishankar Conservation area. From this place,SunKoshi and TamaKoshi flow which originate from Mahabharat Range. 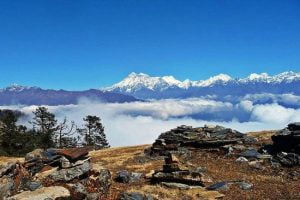 Most people visit Kalinchowk due to its religious and pilgrimage significance. Kuri Village is the beautiful valley which is the basement of Kalinchowk temple and lies right below the Kalinchowk hill. Kuri village is famous for its beautiful landscapes which looks so beautiful during the snowfall in winter season and colorful during the spring season.

On the way to Kalinchowk hill, the hiking trails looks like a garden with the green trees and colorful rhododendron trees during spring season. Kalinchowk is the perfect destination for people who want to experience short hiking , enjoy snowfall during winter. From high altitude, sightseeing of the majestic mountains can be done with less effort.

People visit Kalinchowk throughout the year but during the snowfall and spring season, the number of people visiting Kalinchowk is about twice or thrice more than the other seasons. During the clear weather, the panoramic view of row-landing Himalaya range of Mt. Kanchenjunga, Mt. Lang tang, Mt. Jugal, Sumeru Parvat, Gaurishankar, Mt Ganesh and Pathivara Himal lures the heart of any traveler. During winter and spring season,these Himalayas shine like silver on a clear day.

During the winter season(December to February) , it is the perfect time to visit and hike playing with the snow throughout the way to Kalinchowk. The hiking to the top of the Kalinchowk hill can get thriller and mind blowing experience when travel.

Due to heavy snowfall in Kuri village, between 3 to 5ft. the roof of the house is generally in a triangular shape so that the snow can get easily fall from the top. Due to these attracting view of Kuri Valley, it is found that few people comparing Kalinchowk as a piece of Switzerland.

The Kalinchowk Bhagwati shrine looks wonderful during the winter season covered with the snow around. More pilgrims visit the temple on Tuesday and Saturday compared to other days in the week. During Dashain and Janai Purnima(the full moon), people come here to tie the holy thread in its premise.