Questions raised by the samragyee and namrata.

Even though Deukhuri was the home of Dang, that opportunity was not missed. Although close to the border of Pyuthan and Dang, it took a long time to seize that opportunity.

CP Nepal has been working in the field of women and children in Dang Deukhuri for the past 12 years. This was our first visit to Swargadwari. 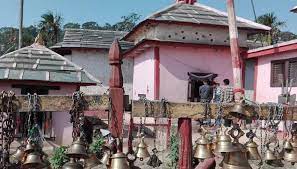 After entering Pyuthan via Gadhwa, Lamahi and Bhaluwang of Dang Deukhuri, some cold weather along the banks of the Rapti was bringing a different kind of joy to our minds.

We entered Bhingri of Pyuthan after a 5 hour drive from Gadhwa.

Bhingri Swargadwari is the main entrance of the temple. After that, the winding and steep paved road of about half an hour was very enjoyable. I was very happy to see the flat terrain of Bhingri Bazaar from the same road.

Swargadwari municipality ward no. Of Pyuthan district. I had earlier studied that Swargadwari, located at 4, is one of the most beautiful, peaceful and scenic religious sites in Nepal, located at an altitude of about 7,000 feet above sea level.

Anyone who reaches there has the impression that Vedic culture has been alive for hundreds of years. One of the ancient temples of Nepal, this temple was named after the Pandavas when they went to heaven in ancient times, so an old man who came to visit the temple later came to know the legend.

The ashram is located in an area of ​​2600 ropanis and it is learned that the ashram has ample land in different places of Dang and Deukhuri.

Here the mausoleum of Swargadwari Mahaprabhu is magnificently built. It has been believed that the Shivalinga was established and that there was a large crematorium in the shrine and that the fire was lit by Mahaprabhu under the influence of his mantra.

Here, the priests will worship and offer sacrifices together. Even when we got there, that work was going on.

According to the priest, the shrine has been burning continuously since 1952 and daily worship is being performed. There is a big fair on the full moon day of Baisakh, Gaitihar Aunsi, Vijayadashami, Maghe Sankranti and other festivals.

In Samarg, it is believed that aspirations are fulfilled when one reaches Swargadwari and worships and observes.

The main temple in the forest and thumko around the top of the hill seemed to be the center of attraction for anyone.

The management of Swargadwari Ashram has made good arrangements for the pilgrims including food and accommodation.

There is a solar-connected hot and cold water system and we also tasted the same produced greens, cow’s milk, curd and honey.

To reach Swargadwari, one can use Pyuthan’s Bhingri road through Bhalubang of Dang under East-West Mahendra Highway. Swargadwari Gate Bhingri can be reached after a 55 km paved road journey from Bhalubang.

In addition to this, people also reach Swargadwari through Ghorahi Holeri. Pilgrims say that the journey to Bhingri via Bhalubang is easy as the road has been damaged in many places during the 56 km journey. from Setopati