Popular Bollywood Actor Varun Dhawan got married to his long-time girlfriend Natasha Dalal. the two tied the knot in a traditional ceremony which took place in the resort named Mansion House in Alibaug. we can see the love between the actor and Natasha in dreamy pictures where the actor held on to his Highschool sweetheart’s hand posted on his Instagram captioned, “Life long love just became official”. Although the actor Dhawan and Fashion Designer Natasha knew each other since school, the couple started dating years before Varun made it big in Bollywood during their college time and stuck by each other all this while. And on they tied the knot and became husband and wife on Sunday (24th January 2021). The marriage picture of the couple where they held each other’s hand with love is going viral on social media sites. Best wishes to both Varun and Natasha. 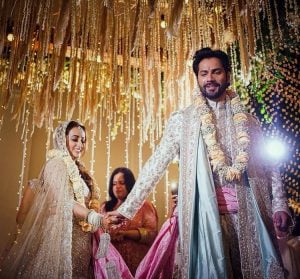